The Map Editor is a powerful tool that is installed along side the game and offers user the ability to create custom maps that can be played online after being hosted on a server. The editor is easy to use and, once you familiarize yourself with its basic functions, creating a map is fairly simple. However, it should be noted that there are no image packs or graphical assets included with the editor. This means that maps must either be created by first creating your own art or by using the art from pre-existing maps. While using pre-existing art can sometimes work, it is usually created for a specific layout of a specific map and usually doesn't fit into a new map as well as newly created graphics. The general functions of the various editor windows are detailed below. 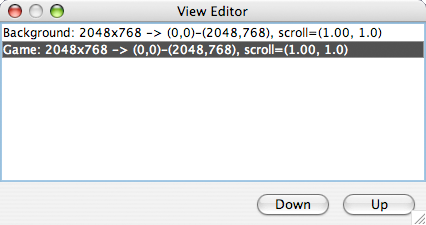 The View Editor window is used to create, view, and edit all the different layers of graphics in the game. The size of the playable area as well as the order in which the graphics are rendered are controlled in this window. The creation of a parallax (moving) background or foreground is also controlled in this window. When a map is first created by going to File -> New -> Map there will be a layer already created in the View Editor window called "Game." The Game layer is the layer in which the actual planes fly and all combat takes place. It is important to note that when you create additional layers, the layers at the top of the list will render first and therefore be behind all the other layers. This means if you have a background layer you want it to be on top of the Game layer in the list in order for it to render properly. Any special items placed using the Create Special window must be placed in this layer or else they will not be usable. This has a few consequences such as any graphics placed in layer rendering after the game layer will be on top of the planes, but it also means that you cannot accidentally (or on purpose) have planes that spawn underneath the background. In order to create new layers, such as for a background image, simply right click in the View Editor window and select "New View." This will allow you to create as many different layers as you want in the creation of your map. Right clicking on the View Editor window also allows you to edit the existing layers for things such as changing the size of the map or adjusting the parallax speed of a background layer. To cause the parallax effect on a background or foreground layer simply right click the View Editor on the layer you want to adjust and select "Configure." Then adjust the width and/or height of the layer so that it is smaller (or bigger) than the game layer, but make sure that the Visual Bounds are the same as the Game layer. Adjusting the size of the width and/or height to bigger or smaller will cause the parallax effect to be lesser or greater respectively. The scrolling effect will be listed in the View Editor after you have changed the values as a value that is a comparison to the size of the game layer. For example, if you had a level with a width of 2000 pixels and you set the background layer to a width of 1750 pixels and visual bounds of 2000 pixels, it would result in a parallax scroll rate of 0.75.

This window is not immediately viewable when a new map is created but it is vital to the creation of any map. It can be accessed by going to first Window and then selecting Show Create Special. This window is fairly self explanatory. It allows for the creation of the elements of Spawn Points, Powerups, Team Bases, and Turrets. Just click on any of the desired items and then click on the map to place them in the game. It is important to remember that all of this different items must be placed on the Game layer. If any of these items are placed on a layer other than the Game layer then it will not work and won't be part of the map. This part of map creation is often recommended as one of the last steps as you can ensure that you put then all in the Game layer and that you put them exactly where you want them in relation to the objects you have created otherwise.

Both of this windows can be accessed through the Window menu item. They both have similar functions of allowing you to place graphical objects in your map. In order to get items to appear in either of these lists you must first place the images that you wish to include in your maps image folder. When you create a new map, a folder is created in your Altitude -> Editor -> Maps folder with the name of your newly made map. Inside your maps folder is another folder named Images. Place all the images you want to use in your map into this folder. If you place them into the folder while you have the editor open you must go to Edit and then select Refresh Resources for them to be updated on either of the lists in the Create Geom or Place Sprite windows. There are no differences between placing an item using the Create Geom or the Place Sprite windows. However, the Place Sprite window does provide the file names along with the pictures, which allows you to differentiate between images that may look the same. One of the main differences between the Create Geom and Place Sprite windows is that the Create Geom window allows you to create collidable geometry without an image. This can be accomplished by selecting the first blank item in the Create Geom list and then creating the desired collidable object outline on the map.

Located on the top menu bar there are three other notable items, other than the obvious save and open functions, that are of use when you are making a map. The first is the Map menu. Inside this menu are four different options. The first option is Change Background Color and it is very important when making a map. Although you might have a background image that covers the entire map, some players with older computers choose to not display any of the parallax, or non-Game layers, while they play the game. This means that selecting a proper background color is important even if it doesn't show when you have the parallax layers turned on as choosing a color that is too bright or dark can make it hard to play for some players. The second option is Change Name Text Color and it is also important when making a map. This feature controls the color of the players names that are displayed over the planes while they play. On maps with light colored backgrounds, black is often picked so that it will contrast and on maps with dark colored backgrounds, white is often picked so that it will also contrast. The third option is Use Black (instead of Gray) Smoke to Indicate Plane Damage. It is important to pick a smoke color that will contrast with the background just like the Name Text Color. Leave this item checked if your map has a light colored background and uncheck it if it has a dark colored background. Once you have finished your map, try testing it with both the parallax layers turned on and off, that way you can determine if the playing experience will be enjoyable for players who use either option. The fourth function is Always Clear Background. Its function is unknown and since it is checked whenever a new map is created, it is a safe bet to leave it checked. The other important menu items are Test -> Run function, which allows you to test your map without having to export it to a downloadable map every time you want to see how the map plays as well as the Export -> Export Downloadable Map function, which allows you to create a downloadable map that is used as a final step when you map is complete and you want to make it available to be hosted on a server and played by everyone.