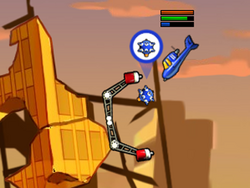 A Loopy scoring a goal in BALL.

Plane Ball is a game type played by two teams of planes. The objective is to score a goal by shooting or carrying the ball into the opponents' goal, while also protecting your own team's goal from the ball. You can carry the ball by picking it up (touching it with your plane), pass the ball to other teammates or to open spaces (press the 's' key), or shoot (press the 's' key). When carrying the ball, planes move at a slower speed.

The ball color will change to represent either the team currently carrying the ball or the last team to touch the ball if it is loose. When the ball is offscreen, the display will show the color and relative location of the ball. The size of the ball will indicate its distance from your plane. Similarly, when you are carrying the ball, the display will show the relative location and distance to the opposing goal.

Strategies of BALL are varied, but a good starting place is the Guide to Ball on the Altitude Forums.

The best strategy involves control of the mid-map area as well as any "choke points" (areas where planes tend to congregate with or without the ball, often smaller holes or tunnels on a map).

In an offensive situation, it is generally useful to clear the enemy planes quickly to create a successful path to the goal. This can mean mining the area with a explodet or quickly bombing the opponents with bombers. Another good method of quickly scoring is by using the fast-moving loopys or mirandas to burst past the defences at the start of a round.

Defending a goal isn't an easy task - many different methods can help in preventing the other team from scoring. Some common methods of actively defending are using a "goalie" (any plane that blocks the goal with its plane, generally using reverse thrust), having one or more players using a "sniplane" (biplane with reverse thrust and heavy cannon) to take out opposition from a height and using walls to block the goal temporarily.

To successfully evade an enemy and work cooperatively as a team to score, passing the ball to others is a crucial part of the match. Defaultly bound to 's', passing the ball is as easy as pointing your ball to the direction you want to pass it and firing away the same as you would use a powerup.

The main aim of the game is to score goals. Using a variety of the methods above, you can work your way towards the enemy's goal and shoot. If there is a large battle in front of the goal, remember that as soon as you pick up the ball, you can shoot it - this is useful for darting through a crowd of planes and shooting quickly into the goal. Another method of scoring is by flying your plane directly into the goal - this will cause your planes death but if an enemy is hovering in front of the goal, will prevent them apprehending your shot.

Clearing is one of the most, if not the most important aspects of BALL. To clear a ball you must find a open empty space where their are no enemy planes and you should "S" the ball in that area. This gives your teammates time to spawn and further attack the enemy goal while making the enemy team waste time by getting the Ball. Clearing should be done if you have little health remaining or when their is no teammates open to pass the ball to. The best ways to clear is often by bouncing the ball off the ground in the direction of the enemy goal, the bouncing will alter the balls average flight path and will further confuse the enemy players. A team which masters clearing is often one the best teams in a league.

Each plane type has a role that it can play in BALL.