The Altitude Ladder is a community-run rating system developed by Maimer, Eth, and Nobodyhome that ranks players based on the results of 5v5 TBD and 6v6 BALL games played on the four dedicated ladder servers. The idea behind ladder is to give players a chance to rank their competitive ability and then challenge players of approximately equal skill using a live updating system that allows for concluded games to be recorded in real time and displayed on the ladder website. The Altitude Ladder is currently in its second season.

It is important to be familiar with the rules of ladder before playing, as failure to abide may result in a temporary ban.

The Official Ladder Administration Thread can be found here, but there are basically 12 things to avoid doing:

Season 1 used an autobalance algorithm to determine teams in conjunction with a modified version of the ELO rating system, which was originally originally made to calculate relative skill levels of players in two player games. The modification allowed for teams to play each other while the rating of each player was calculated individually. The result was a gain of 24 or 25 points for a win and a deduction of 24 or 25 points for loss.

In Season 2, the autobalance algorithm no longer picked teams so that average ratings were as close as possible, but were instead balanced in a 1, 4, 5, 8, 9 vs 2, 3, 6, 7, 10 fashion. The rating system was also changed in that the number of points gained and lost was influenced by a number of additional factors and varied from game to game.

For the full explanation on how a player's rating after a game is calculated, see this thread.

As an added classification element, players' ratings are split up into 10 categories and are accompanied by an icon, mirrored from the officer ranks of the United States Air Force.

A Word of Caution

With every competitive multiplayer game there is always a negative side-effect, nerd rage, and Altitude is no exception to this. As people work tirelessly to try and obtain the highest ranking possible, they often blame other people for negative outcomes. Sometimes this is justified, while other times it's just their being upset and looking for a scapegoat. Regardless, if you are starting off, chances are you will come under this kind of attack. As with any other online argument - the best thing to do is to mute the offensive player and move on. Getting involved in long and drawn out arguments will only hurt your online experience.

That being said, some of the rage can be helpful as long as you can filter through the cuss words, hatred, etc. There might be something you hadn't considered or a new style of play you should try. Maybe you should even consider going back to official 1, 2, or 3 for a little bit to hone your skills. If you wish to continue to play, remember that you can't be banned solely for your skill level. 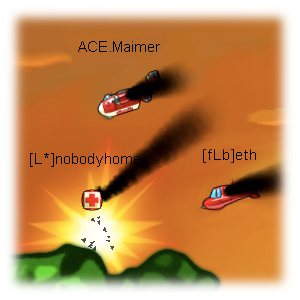 In addition to its original creators, the ideas behind the overall scope of the Altitude ladder as well as its creation and implementation were the product of many more individuals who frequent the Altitude IRC channel on Quakenet(#TL.Altitude).

Maimer, Eth, and Nobodyhome can be seen in all their glory in the accompanying image. It is not recommended that players of average skill attempt this flying formation.